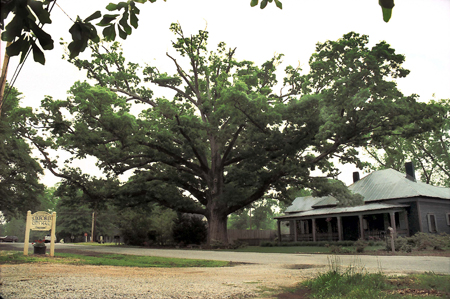 The nomination of this #greatamericantree is dedicated to Connie Head and Beryl Budd.

The Yarbrough Oak, located in Oxford, GA at 107 West Clark Street, was one of two trees in Georgia that owns itself (the other is in Athens). The white oak (Quercus alba) was named “Prince of the Forest” by the Reverend John Yarbrough, who began a tradition of devotion to this magnificent old oak in the 1920s. In 1929, the commissioners of Oxford deeded the tree and the land it sits on to the tree.

In the ensuing 60 years, urban stresses placed the tree in serious decline. In 1999, recognizing the hastening decline of this significant tree, the Oxford Tree Board decided to propagate some seedlings from the tree as a way of preserving it for future generations.

The multi-step process began in October, 1999 with the collection of acorns by then Georgia Forestry Commission (GFC) Chief Ranger Beryl Budd and his staff from the Newton/Rockdale County Unit. Cleaning and propagation took place at the GFC Flint River Nursery, and about 800 high quality seedlings were grown. Ready for “lifting” out of the nursery beds in the winter of 2001, some of the seedlings were given out during Arbor Day celebrations and others were sold to the City of Oxford.

Recognizing the merits of this propagation model for perpetuating notable Georgia trees, Connie Head of Technical Forestry Services (TFS) proposed a joint venture to sell some of the seedlings in the winter of 2001. A collaborative effort was established among the Georgia Forestry Commission, the City of Oxford and the Oxford Tree Board, Technical Forestry Services (TFS), Stormy Branch Nursery and the Georgia Urban Forest Council (GUFC). Stormy Branch Nursery agreed to grow 485 trees in 3-gallon containers, TFS agreed to develop promotional materials and funding, and both the GUFC and the Oxford Tree board contributed funds.

Nearly 300 Yarbrough Oak offspring were sold throughout Georgia. Sales were coordinated through the GUFC and promoted heavily before Arbor Day. The project accomplished its objectives of recognizing the community value of a significant tree, perpetuating the tree for a future beyond its own, and serving as a model to other communities for ensuring their own tree legacies. In 2002, the Yarbrough Oak was taken down.

Although this 350 ft. circumference, 180 years old tree is no longer standing in Oxford, its legacy lives on. More pictures are available in the Georgia Grove. Thanks Connie Head, Beryl Budd and partners for leaving this beautiful legacy in Georgia!